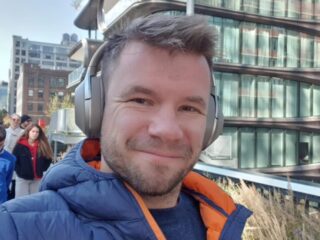 Szymon Wróblewski – playwright, playwright, translator of American drama. Since 2012, he has been cooperating with the Adam Mickiewicz Institute in the implementation of theater, dance and publishing projects. He has produced over 50 cultural exchange projects with partners such as Yale University, Harvard University, Brooklyn Academy of Music, New York Live Arts, National Stary Theater, Lublin Dance Theater, Divine Comedy Festival, Princeton Festival of Poetry and many others. Nominated for Polityka’s Passports in the Theater category, author of dramas staged in Poland and Germany. Translator of plays by Martyna Majok, Pulitzer winner. He is currently working on the script of a film and series set in the 1960s and 1970s in the People’s Republic of Poland.