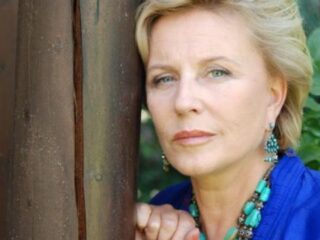 She is a graduate of the State Fine Arts Secondary School and the State Drama School in Warsaw. She has also graduated from the Music School of the First Degree and the Ballet College at the Warsaw Operetta. Krystyna Janda made her debut during her studies. She played Masha in “The Three Sisters” by Anton Chekhov in the TV Theatre performance. Her theatre debut was the role of Aniela in “Maidens’ Vows” in the Ateneum Theatre and then the role of Dorian Gray in “The Picture of Dorian Gray” by Oscar Wilde in the Mały Theatre. She played her first film role was in Andrzej Wajda’s “Man of Marble”.

Since the 80ties, she has been continuously acting and working. She has played more than 60 roles in various theatres: from Antiquity through Shakespeare to the contemporary theatre repertoire both home and abroad. In her repertoire there are many monodramas, each of them successful. She has played over 45 roles in the TV Theatre spectacles both classical and contemporary. She has also starred in 50 feature films. Krystyna Janda is the winner of various awards and distinctions granted both in Poland and abroad. She has been awarded a Gold Palm during the Cannes Film Festival for her role in the film “Interrogation”. She has been also awarded the Medal of Charles the Great in the field of culture for her contribution in the process of unification of Europe.

Krystyna Janda acts, sings, directs, writes articles, keeps an Internet diary and publishes CDs and books. Several times she has been awarded the title of the Best Actress in Poland. In the late 90ties she was awarded the title of the most distinguished actress of the century of  the Polish cinematography by the magazine Polityka.  In 2005 she took up a challenge of creation the theatre functioning independently from the state structures which has altered the theatre reality in the country. To this purpose she established the Foundation of Krystyna Janda For Culture of which she is president and funder. Her foundation has established two Warsaw theatres: The Polonia Theatre and the Och Theatre. In 2014 she was awarded a title of The Person of the 25 Years of Freedom in the field of culture.