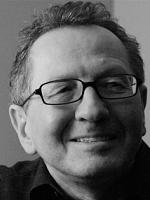 Documentary and feature film director and writer, producer, poet.
Author of several volumes of poetry. In 1974 he received an award at the Warsaw Poetry Autumn.
In the years 1973-90, associated with the Documentary Film Studio in Warsaw, in the years 1990-94 a member of the “Kronika” Film Studio, since 1994 he has been running TAK Film Studio, which he founded himself.
In the years 2004-06 deputy head of the Documentary Films Editorial Office of Channel 1 of Polish Television. In 2005-10 he was the artistic director of the International Film Festival “Jewish Motifs” in Warsaw.
He is also a theatre director and conducts didactic activity. In 1998-99 he lectured at the Institute of Polish Culture at the University of Warsaw, since 1999 he has lectured film history and issues of the film form at Cardinal Stefan Wyszyński University in Warsaw, since 2004 also at the Warsaw Film School. Since 2010, lecturer at the Gdynia Film School.